Have been amusing the establishment with drawings of my companions.  Jock is writing a letter on his to send his wife.  The plebeian considers I have given him too wild a glare in the eye.  In mortal combat with Demon Mud, in plastic form on the ground, and in concrete stalactites on the mules.  The weather is getting like the moist head of Auckland.  Not that I’ve got any quarrel with Auckland.

Broad marks across the fields show where tanks have passed, pressing the young crops down into the soft earth.

Good tobacco being temporarily unobtainable I’m making shift with a vile concoction of issue stuff and a sort of black-twist costing the huge sum of 2½d a stick.  Though so unlike our bush in matters of detail and lack of undergrowth, the tout ensemble of these old-world woods is reminiscent of our own.  Patchy grass in place of our undergrowth showing up the boles of the trees and giving a spacious air.  The sound, too, of a chorus of birds of the one hemisphere is very like that of the other.

I was deceived in Duron Lagniez.  I thought him a land salesman.  After “long argument about it and about it” I must admit that it is the iron gates, on which his legend appears, of which he is, or was, the “constructeur”.  I now picture him as a master smith with a square black beard and authoritative bearing, his very gait recrudescence of business.  We hear that the redoubtable Von Mackensen is after our gore, but are more put out to hear that the Colonel is going to spring a surprise visit on us soon. 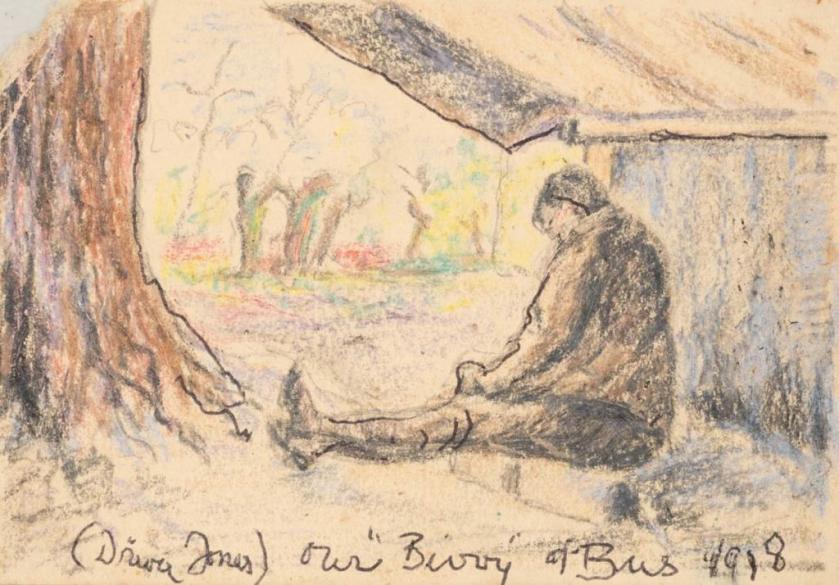 For the first time heard a Cuckoo.  The note is soft and mysterious, well represented (without the mystery) by the cuckoo clock.  I may remark that the Argentine Songster, of whom I gushed one fine morning, looks to be a species of linnet and his note is only a cheerful whistle, but in that period before dawn when “The casement slowly grows a glimmering square”, (N.B. No casement in our bivvy) it seemed a subtler thing.

To show you the extraordinary chances of war – you will remember how a solitary shell casualtied between 20 and 30 horses; today a shell burst right in front of a wagon team.  The underneath part of the wagon itself was much damaged and the pole almost severed; the shell-splinters must have passed between the legs of all six animals, 24 legs, without touching one of them, their drivers, or the men aboard the vehicle.

The woods are clothing themselves in foliage, copper beaches are noticeable, the fruit blossoms are commencing to fall. 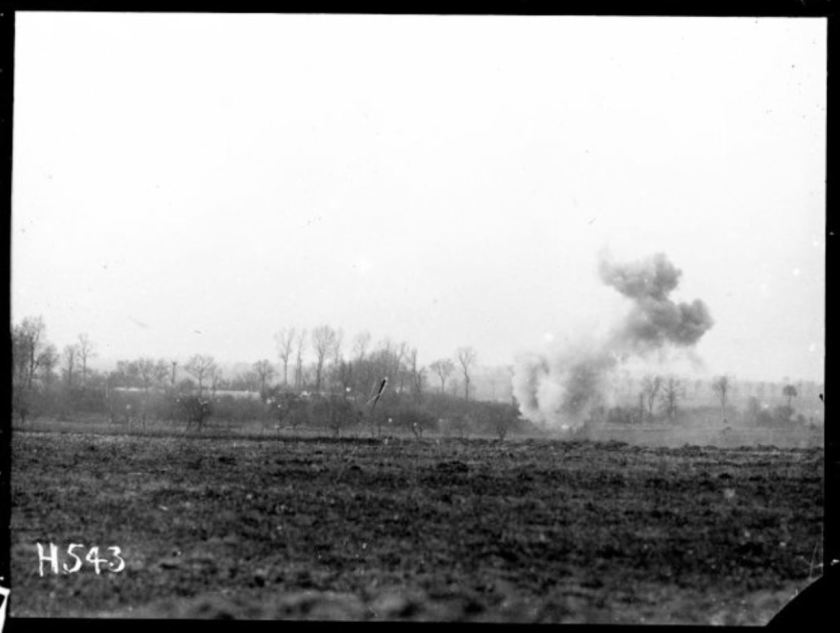 We have been treated to a thunderstorm and have received one orange (and eaten it – the orange not the thunderstorm).  Today being payday, the Crown and Anchorites are popping up like garrulous mushrooms (have you ever seen one?) bent on securing some of the shekles.  “Any more for any more”?  “You pick ‘em and I pay – where you like and when you fancy.  And the old man has a skinner for dinner.  Away we go to war again.  And the old man spits blood!”

A bit of humour at the expense of the Tommy artillery bivouacked in an open field behind us.  When advising us of our rendezvous in case of shelling, our O.C. remarked “I don’t anticipate any shelling, but our friends over the way seem to have successfully camouflaged their establishment to look exactly like a Camp.”

It was there a man was given “Field punishment No. 1” i.e. spread-eagled on a gun wheel.  Our chaps went over and untied him and so “put the breeze up” the Sgt.-Major that the act was not repeated.

A rather nice brand of ‘bully’ is called “Fray Bentos”.  The men has seized upon the words as an expression of satisfaction, e.g. “How did you like such and such?”  (answer) “Oh Fray Bentos”.  The words of General Russell good:  “The dawn is already breaking in the East.  May you see the Southern Cross next year.”  Have only recently known that Rodin is dead; what a loss!  This has been my page of oddments.  Oh that we two were maying! 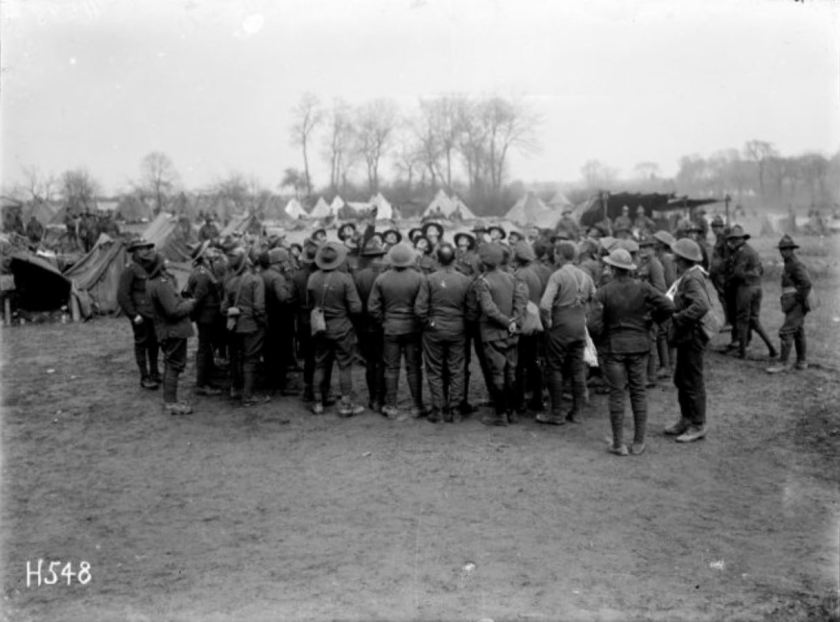 Did a picquet in the small still hours.  During the night Fritz dropped a string of heavy bombs.  Though bombs are no more dangerous than shells everyone hates them – they drop with a kind of menacing throb-b-b throb-b-b! and an unseen aeroplane, by some acoustic peculiarity, always sounds directly overhead.

Novel sight of dropping of propaganda balloons over Hun’s lines.  Bright blue in colour.  Don’t know by what arrangement they are regulated, probably clockwork. 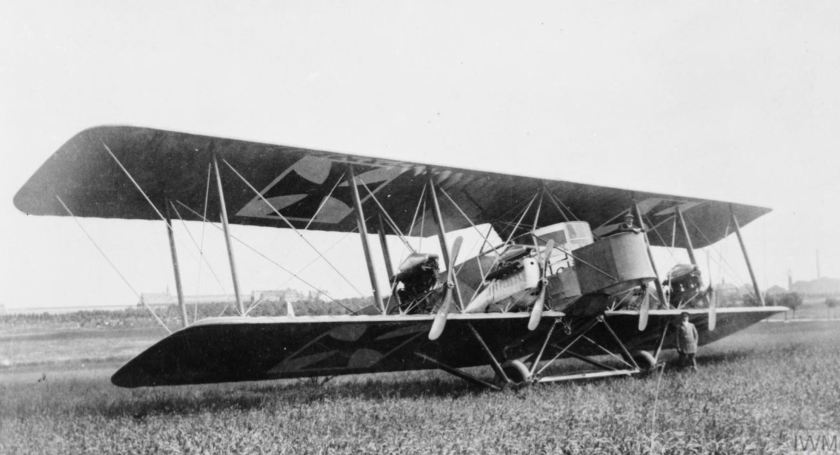 Last night Jock, Bombardier Dawson and I carried on rather abstract discussion to a pretty late hour, to the obvious boredom of the two cow-spankers: “get to bed you bastards” they said “and to hell with your Hart and your littertoor”.

A distant picturesque old windmill, peeping over the brow of the hill, swings his big arms slowly against the sky; church spires peep up from among the wooded villages and one begins to soak in somewhat the spirit of an ancient and famous country.

Riding to water this morning, whiz, plunk, plunk! nose-caps from anti-aircraft shells smacked into the ground a few yards away.  Merriment in the horse-lines when one of the sergeants came crashing through the hedges leading a wild-looking horse drawing an enormous roller, used by the peasants for agricultural purposes, and with it rolled the now doughey mud into a state approaching consistency.  Supper last night a superlative mixture of rolled oats and custard concocted by Jock almost at the expense of his eyesight over a fire of bituminous painted boards.

Have been for a stroll with Jock, talking of pleasant things – of designing houses and building them and other pleasantries of the world we have left but not forgotten.  He, too, is married.

Cold, damp, and raw.  This morning entertained by an escaped charger; a large black horse, which in spasms of elephantine friskiness insisted upon accompanying us, punctuating his gallops with harried munching of young oats, whilst his distantly blaspheming driver brought up the rear.  He, the horse, would be pausing to crop the oats and apparently an easy prey, but out of the corner of his eye he had been noting his would-be captor, and just when the latter’s hopes were rising up, up went his heels and down went his head and “Quadrupedante putrem sonitu quatit ungula campum”.  Witnessed some rite of which I am ignorant.  An old priest, accompanied by a woman and young girl carrying a large box with a cloth covering, walking down the middle of the street monitoring all comers aside in an authoritative manner.  Perhaps something to do with May Day?