All madly scrubbing and rubbing up bits of harnesses for Sunday’s inspection, when the smartest battery will be chosen to represent N.Z.F.Z at the coming show.  Dawson has actually cleaned his buttons and is using one as a mirror whilst brushing his hair.  The mules have been on short commons and are beginning to cast indignant and malignant glances behind them and eat more rope.

Had to wait an infernal time in the sun for the water troughs, so I lay back on the mad mare’s back and must have gone to sleep, for when some idiot scared her I was rudely awakened by falling with a fearful bump on my nether and in the dust, to the huge delight of the bystanders. 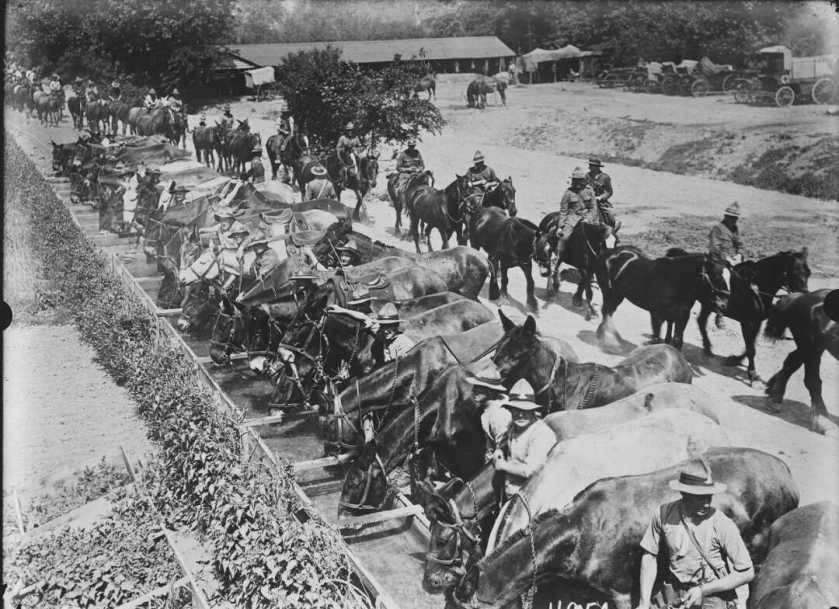 [Image: New Zealand horses and troops at a watering point in Louvencourt, France, during World War 1. Shows a row of horses at a drinking trough and a procession of others behind them. Photograph taken 1 June 1918, by Henry Armytage Sanders. Alexander Turnbull Library, Wellington, Ref: 1/2-013260-G]

In the evening we made two journeys with ammunition.  Saw a dump blown up in the distance, lighting up the sky with an intense flame for a few seconds, accompanied by a dull roar.  Practising for the sports I had entered for the “mule hurdles” but as neither of my hybrids can now be tempted, coaxed, cajoled, beaten or tricked into taking the hurdles, I’ve given them up as a bad job. 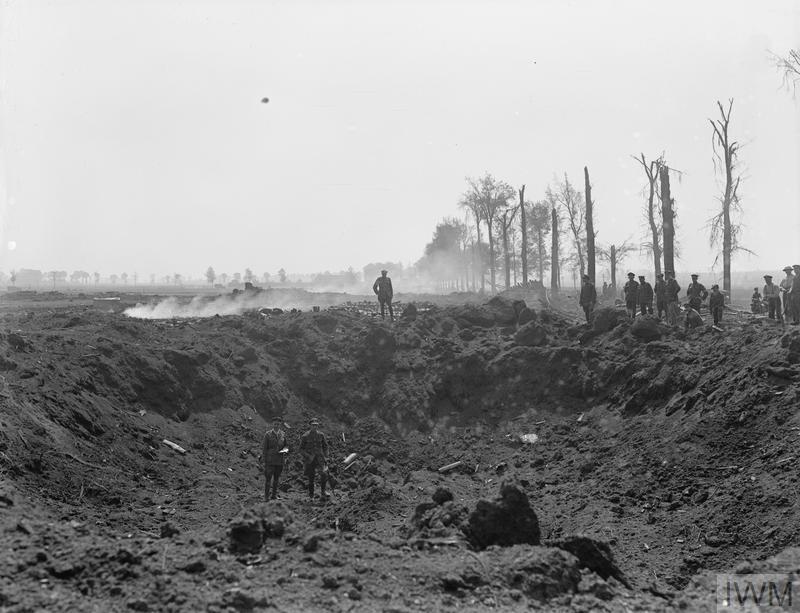 [Image: Crater caused by the explosion of a British ammunition dump at Wardrecques, 19 May 1918. IWM (Q 11473)  Note – this is not the area where Lincoln is deployed] 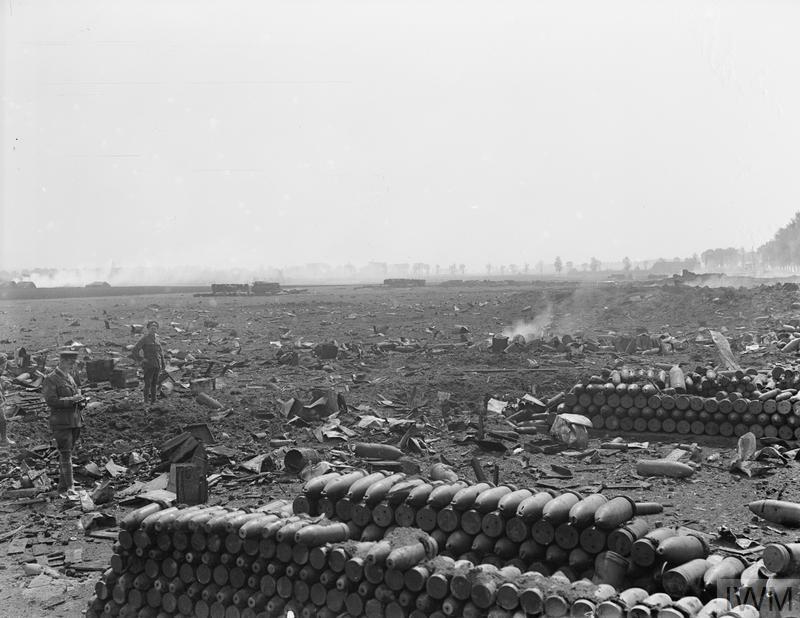 Had tethered my mules and sat down with a sigh of satisfaction only to realise that I had planted my bare arm in a bush of stinging nettles.  This is nerve wracking.

They are making a cricket pitch at the back of the camp and have adopted a cunning method of getting it hard, to wit, by making us ride over it every time we go to or from water.  In one day it has been stamped quite firm.  Tried Rangatira over the jumps the battery next door have put up.*  He jumps strongly and well, but much prefers to dodge it.  Apparently a mule is constitutionally unable to gallop at his top speed.  Whenever I have tried one at it he has put his head right down until he seems in danger of going head over heels.  Whilst prancing about I suddenly caught sight of Jull standing by watching the performance.  He tells me R. had been peppered all over and is in a Belgian Hospital.

* Although not referred to by Lincoln, the images below show a horse show held by the New Zealand Infantry Brigade on 20 May 1918.  Seemingly horse (although perhaps not mules!) jumping was a popular recreational occupation at this time. 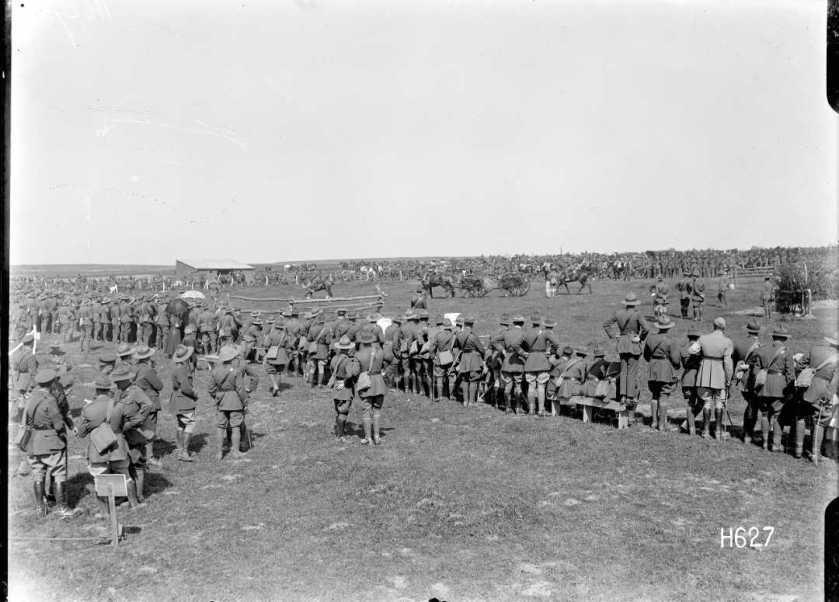 [Image: A general view of the show ring at the New Zealand Infantry Brigade horse show, held in Vaucelles, France, during World War I. Spectators are looking towards the ring where an event is in progress. Photograph taken 20 May 1918 by Henry Armytage Sanders. Alexander Turnbull Library, Wellington.  Ref: 1/2-013234-G] 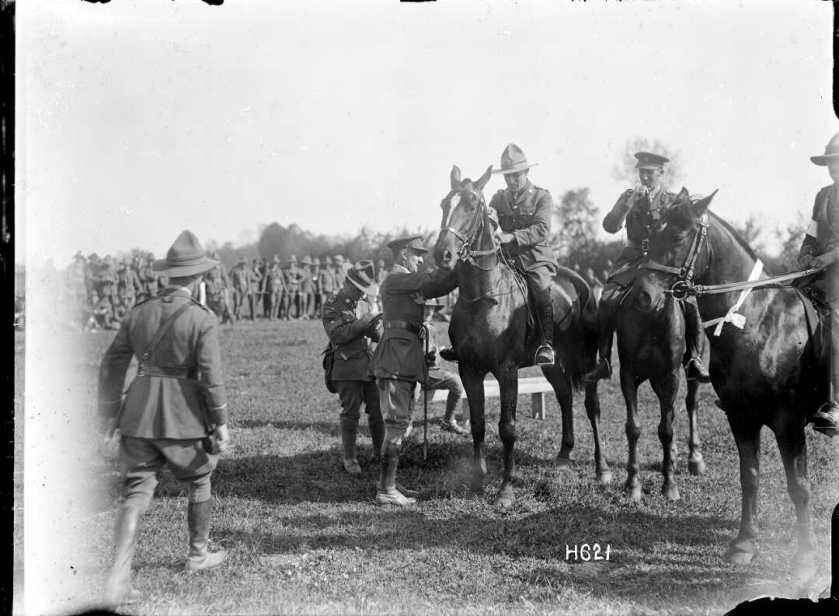 My 34th birthday.  A cool breeze playing over the land.  Scatty had the effrontery to shy at a donkey led by the oldest and most crumpled-up man I’ve ever seen, not recognising her own half-brother.  Water is a problem in these districts.  It is quite a sight, the pairs lining the road for kilometres, waiting their turn.  Today you can smell the sea in the wind, the hawthorn is in the height of blossom, poppies are showing up amidst the corn and the meadows are sprinkled with butter cups and millions of misguided human beings are occupied with the problem of mutual murder.  In the hazy light-blue sky, aeroplanes are singing like hornets.  Set off to a village about 4 miles away where a stream has been damned for bathing.  Rangatira makes a fine little hack and I should like to acquire him apres la guerre.  How would I look trotting up Queen St. on a mule?  At the pond were a number of Yankees and it was interesting to hear their conversation and study their types, mostly big men.

The grass is a seething mass of insect life.  I tethered my mules to a partially buried wire and did a rough sketch of some trees.  The next time I looked they were stampeding, maddened with terror by an old sack, pulled out of the ground with the wire and now leaping and bounding after them like the Mullish Nemesis.  After they had become entangled in the chains and violently thrown by and then repeated the stampede, I managed to secure them, crestfallen, somewhat scratched about and still eyeing with dread and apprehension the now motionless Flying-Sack-Demon.

The Gamblers take not the slightest notice of the weather, the war, or other phenomena, absorbed in the spin of 2 coppers.

Magnificent beetles and other insects, spawned from the warm soil, are making clumsy efforts at flight.  One enormous fellow after setting different-hued sails, only managed a six-inch flop.  Spiders and other leggy individuals are running steeple-chases over my puttees and strides.

Great fun this afternoon watering.  On reaching our troughs found them out of order and had to go a mile and a half away.  The sergeant in charge of us was a sport and in defiance of all rules and regulations took us across country at a hand-gallop.  About 15 colonels set up a hue and cry and took the names of battery etc – (Bai jove!).  The sergeant is a fine chap – absolutely fearless – holds Military Cross, Serbian Medal and what not.  When he gets them he shoves them in his pocket and says “Oh well, I suppose my mother will be pleased”.  I have been re-reading Shelley to be awakened out of the wonder-world of his creation into the vile world of hate and murder which has evolved from those types which he detested.  Been growing strong carting ammunition.  A battery of 6 inches let fly right across the road, scaring us and our donks into the middle of next week.

During grazing one horse got so entangled in his tether as to be thrown – amusing to see him make the best of things by instantly resuming his repast in a recumbent position. 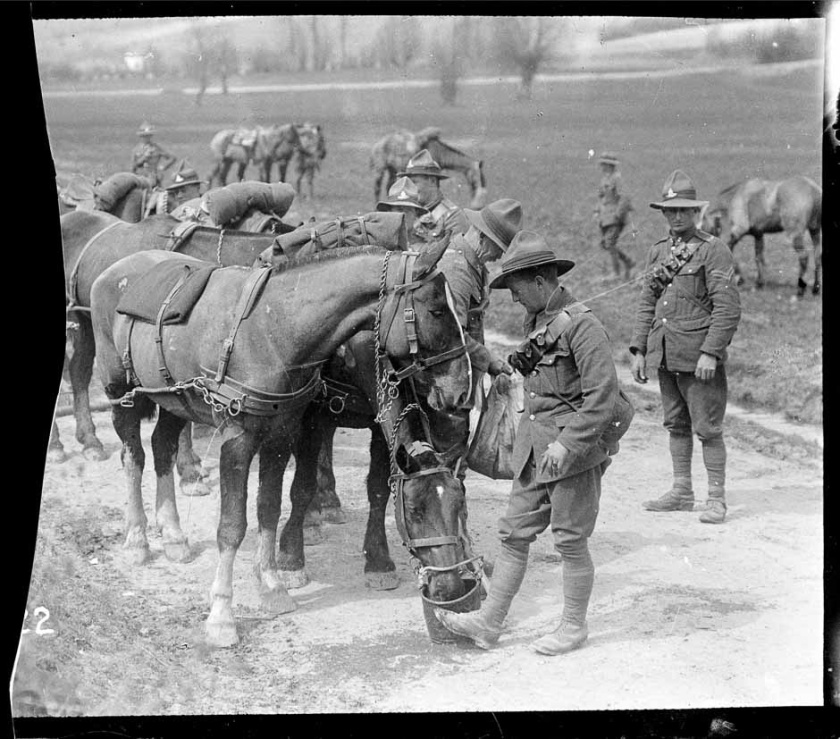 [Image: Feeding the horses of a New Zealand howitzer brigade near Lumbres, France, during World War I. The horses remain harnessed. The horse in the foreground eats from a feedbag. Photograph taken 15 May 1917 by Henry Armytage Sanders. Ref: Turnbull Library, Wellington 1/4-009455-G.]

Rangatira has developed a high-pitched tenor note in blowing his hose – a true chieftain, magnificent even in his emunctions, he blows his nose like a bugle.

The mad mare who replaced my deceased hero, will have none of me; her back is one perpetual arch, her eye a maniacal glare, her slender but badly scarred legs move in fitful prancing.  I sweat, I swear, making ineffectual dabs with my brush, I seize her legs and hold them up by main force, she lurches at a dangerous angle and threatens to fall on top of her tormentor; or actually lifts the other leg and drops on her knees.  The chieftain regards me coldly in stern aloofness, unresponsive to my encouraging pats, his hard little underlip set firm.  I groom at his sturdy hocks, which he permits for a while, motionless, indifferent; smack! with lightening rapidity he has lifted his foot and stamped in the vicinity of my boot.  But I like him, though my passion is, and always will be, unrequited.

Blue propaganda balloons have been released at intervals and gone sailing over our heads to drop their mental bombs on Fritz’s lines.