Again tackled Opernhaus.  After desperate attempts at conversation aided by various linguists, I managed to obtain a ticket for tonight’s and another for Thursday’s performance.  Tonight’s was a serio-comic opera of the old style, by Johan Straus: De Zeigerbaron – pretty music, and some attractive dancing, especially an old fashioned minuet in court costume, but comic opera loses greatly from being in an unintelligible tongue.

Found myself in one of the boxes with a Tommy and two young ladies, and felt rather a big ass, especially in the intervals when we made pathetic attempts at conversation, greatly to the frauliens’ amusement.

Church parade in Protestant Church.  On the way there we passed an immaculately dressed German lying stone dead on the footpath.  The terrible plight of the German civilians is brought home in many ways.  Our men on arrival were sometimes met with invitations, by small children, to “Schlape mit Muder” – starving!  Our grubby cook has relieved himself of many chores by employing desperate looking workers at the price of a meal: their appetisers being hastily snatched crusts and crumbs as they clear our tables.

To Opernhaus, to find there a notice saying that all seats sold out, and no standing room.  Caput Tanhausser!  (“Caput” seems to be German slang for “Napoo” “finished”).  Took stroll and saw (inter alia) one of the nail-studded wooden war-statutes.  The effect of the nails is very like copper after corrosion has set in.  This was a large martial figure holding a great sword, and the pedestal was encrusted with iron laurel leaves of the Victory that was not.

Went into the Cathedral and sat right thro’ an evening service.  The sermon was delivered with much force and eloquence in a high, fluent and penetrating voice that rang and rang again throughout the mighty interior, and was worth listening to from a phonetic point of view alone.

Off this afternoon to the Cathedral.  Having no knowledge of architecture and ecclesiastic decoration, I can give no coherent description.  It strikes me as immensely spacious, lofty and noble.  The windows are very large, and the tone and blending of their colours wonderfully rich.  As with all great cathedrals, one feels amazed that human beings could have made it.

Old Cologne is built in half circles radiating from the Cathedral.  In this part, the streets are very narrow.

Ted Jull and I went into the city, and in various cafes (“Restauration”) had tiny glasses of wine at 2 marks (about 1/3 each), and equally expensive little triangles of apple tart.  In the cafes they keep up an intense heat and no ventilation, as is apparently the custom all over the Continent, both in public and private houses; as in U.S.A.

The German language seems difficult to pronounce, but when spoken properly, is by no means so harsh or guttural as most of us imagine.

[Image: A group of New Zealand soldiers standing at the top of the steps of Cologne Cathedral in 1919. Prominent in the background is finely sculpted Gothic statuary. Photograph taken by Henry Armytage Sanders. Alexander Turnbull Library, Ref: 1/1-002089-G]

Searched out the Opern Haus, a fine building in an open space called the Hohenzollern Ring.  From enquiries we discovered that the performances start early, owing to the curfew in force.

In Cologne.  It is a curious thing that after all my pre-war dreams of going to Germany I should now find myself here malgre moi, and upon my soul I am beginning to be reconciled.  We clattered out of our small town at about 9 a.m.  In the distance was a low ridge, crowned with immense works presenting a forest of smoke-stacks against the sky.  A fast electric car service runs about to neighbouring towns and villages.  At about 1 p.m. we reached the outskirts of the city, comprising residential areas, wide, well-paved streets lined with trees and occasional public gardens.

The attitude of the inhabitants is, as can only be expected, cold and undemonstrative, but there has been no jeering or unseemliness of any kind.  Our route lay through the centre of the city, so that we obtained a good impression of its size and architecture.  At last we came right upon the cathedral, the most majestic that I have ever seen.  It stands in a large open space, the rear elevation facing the approaches of what must be one of the finest bridges in the world.

Over this tremendous structure our column passed, perhaps 50 feet above the great rolling Rhine, here 500 yards wide.  This bridge (there are several others in sight) is built of stone and steel, in three arches or spans, each punctuated by twin towers of stone rising to a considerable height, especially those at the approaches, where they are set off by splendid bronze equestrian statues.  The tout ensemble, viewed from our quarters which are just across the river, is indeed magnificent.

Our quarters are in what had been a pleasure ground – switchback railways, katzenjammer castles, and so forth – but appears to have been used during the war as a prison camp.  After tea I went across the bridge into the city – alive with British and Colonial troops.  I entered the cathedral and, tho’ not shown to advantage in artificial light, I was much impressed with the interior as the exterior.  Whereas the latter is of extraordinary richness, the former has an air of solemn grandeur almost plain in comparison, being split into several lofty aisles by long rows of majestic, fluted columns, each decorated with statuary. 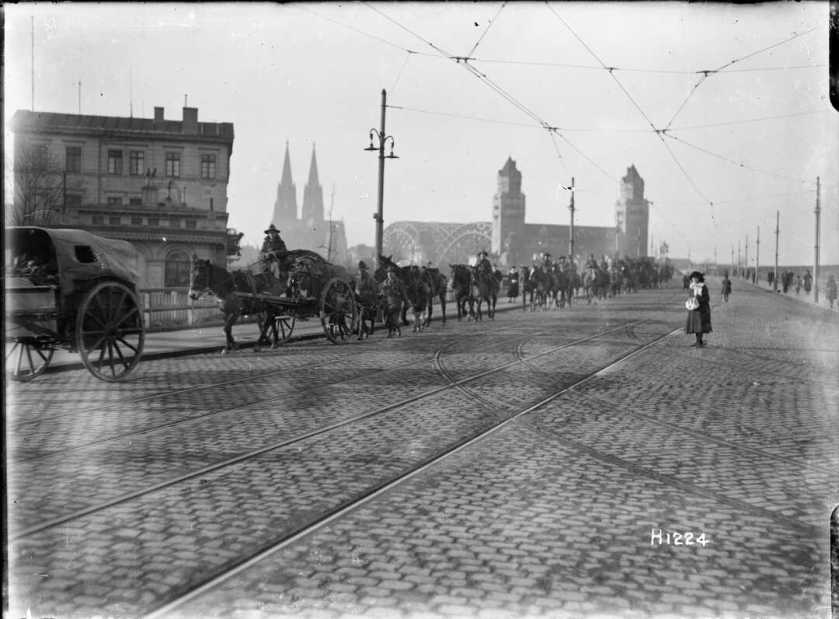 [Image: New Zealand transport and mounted troops passing through Cologne, Germany, as one of the armies of occupation at the end of World War I. In the background is the Hohenzollern Bridge. Photograph taken probably December 1918 by Henry Armytage Sanders. Alexander Turnbull Library, Wellington. Ref: 1/2-013771-G]

A light fall of snow on the ground.

I strolled round the village to warm my toes and, seeing the whole community moving churchwards, joined them, and stood in the crowded church throughout the service.  It was Catholic, with music which to my starved ears seemed divine, especially a fine chant sung at the close by the whole congregation.  I could not but feel impressed, with the religious attitude of the people, the plain but handsome ornamentation of the church, and to some extent sympathetic with the people who no doubt owe their present unenviable position to the sins of their rulers.

Obtained a bottle of some queer drink like weak crème de menthe.  Considering the depredations upon their poultry yards, the folk are better humoured than might be expected.  “When tomorrow’s sun doth rise” in its native language!  I have just heard it sung, and am attempting to tell them that we too sing it in English.

Dinner over, and not a bad one – mutton, soup, several vegetables, and tinned “duff” with rum sauce.

In a chilly loft in a house of a farmer.  Save for a few venturous few who have raided hen roosts and made up to the cook, Xmas fare is not yet on issue.  We find ourselves this evening in the outskirts of this small town, some distance beyond Duren.  A large tract of country traversed today was almost devoid of fences and of habitations between the many towns and villages dotted across it, the intervening land being highly cultivated, and well sprinkled with hay stacks, whose sunlit brown and gold stood out against the deep blue of a distant ridge.

We passed through the centre of the considerable town of Duren thro’ which a river of almost the size of the Meuse flows.  I was struck with an expressive bronze statue of Moltke.  At a halt in the town we were much amused by our officers stopping civilians who failed to salute them, and making them doff their hats.

I am impressed by the care and method shown by the Germans in the design and laying out not only of the towns, but also of the country generally.  Thus, in several instances we have driven up straight, tree lined roads, at the far end of which stands framed, as it were, some conspicuous object, such as a tower or a monument.

I am just underneath the bare tiles of the roof, and they strike down like a glacier.

9 p.m.  Ye Gods!  I have “done the town”, entered and jabbered in almost every shop in the place, and purchased a handful of sweets for about 1/-, and a penny clay pipe!  They are very chary about accepting French and Belgian money, and ask for “deutsch geld”.  The farmer who owns this house was a Sgt. Major, and fought at Verdun and the Somme, and was wounded.  He has a smattering of French.  A large portion of the people in this district appear to be Catholic: so I judge from the number of roadside crucifixes and shrines.  In one of the forests was a most singular crucifix carved out of wood and painted in two colours.

Sitting most of the day on horseback with the water streaming out of our boots and down our necks – a pretty picnic!  More pine forest; the high land being planted with sombre green drooping pine.  The method of afforestation is methodical.  Rough or marshy land is chosen as being unsuitable for other cultivation; one area is heavy grown timber, another packed with saplings which are thinned out for the uses which they serve; a third will be just felled and replanted with tiny seedlings.  Here and there amid the woods are dwellings and inns, often of quaint and curious design: one side of a house will be brown or red stone cemented together in irregular shapes, another red brick, a third perhaps painted wood or plaster, distempered and inset with beams picked out in dark colour.  This sounds motley, but is often very handsome.  (However these are probably holiday cottages.)

Our host is an older whiskered man whose conversation we have been trying to follow.  He says the Kaiser has gone mad in Holland – what one would expect!

Two churches are noticeable, probably a Catholic and a Lutheran, and there has been a going to and from services!  The inhabitants all in their Sunday best.  Most of the urchins are wearing soldier’s caps, thrown away by Fritz in his anxiety to become a civilian again.

In distinct contrast to rural France (as I know it) fences and hedges abound.  The houses are scattered about the landscape, and farming approximates more to the English methods.  On the whole the buildings are in better repair and of more modern appearance than the French, and there is moreover an air of progress.

Everything is very scarce and dear.  Nevertheless the people seem well clothed and shod, but it is in big centres that the pinch is felt most.

The big pine wood which we passed through is visible from here.  Most of the men detest woods; it makes them low spirited, tho’ they cannot analyse the feeling, which is, of course, world-old.

We experience curious complications in our money-markets.

Just had lunch – that sounds normal to you, but to me it means grasping with filthy hands (just after grooming) a hunk of bread and jam, and watching it grow grubbier and grubbier whilst I eat it.  Also standing perhaps in the rain, for anything up to a quarter of an hour waiting for it.

This is a farming district.  The roads are well metalled, and a great contrast to the muddy French lanes.  The houses are well built and plain but neat in appearance.  The sanitation seems much better than in the French villages, and the huge muck-heaps of the French farmyards are conspicuous by their absence.