Made Crondall by a track leading over stiles and rustic bridges, through woods and copses from field to field until it eventually landed us near our food-provider’s back garden.  We stopped in various shady nooks to eat blackberries and play with a tame pony.  This path we afterwards discovered is called Paradise because of its many charms.  After dinner we sketched part of the village and a round haystack.  That over, we set forth to Odiham, 4 miles further on.  A delightful walk along a splendid tarred road with huge elm and oak trees on either side, often meeting over-head.  There were some ripping old cottages en route, one of which I sketched amongst its trees and hedges.  Near it was an amazing structure, the thatch of which projected far enough to form a verandah and was propped up all round by rustic poles.  Odiham: a larger place than Crondall.  The first two pubs we came to looked rather pretentious and were styled Hotels.  That did not suit us, so we proceeded.  Saw some old stocks in which offenders used to be placed (Lights out! and a rough house on owing to the draft men going tonight – Lights turned on again so resume in bed).  We wandered on through the long straggly main street until we came to the real thing in pubs – low, old and laced with beams – in front of it the village pump, which we worked and, to our delight, brought water up at the first heave.  Sat in the funniest low-ceilinged tap-room at a table made of a single rough oak slab which had been scrubbed out of recognition; served by a rheumaticky old chap from a bar about 4 ft. square – to wit – the cupboard under the stairs.  We ate our simple supper there and after I had obtained from mine host a cigar, and not a bad one either, proceeded to our homeward way.  The full moon came up a golden globe behind the trees and everything was, to use R’s adjective, “Apple”.  The departing heroes of last night made such a mess that I got the job this morning of cleaning up so will also clean up my correspondence. 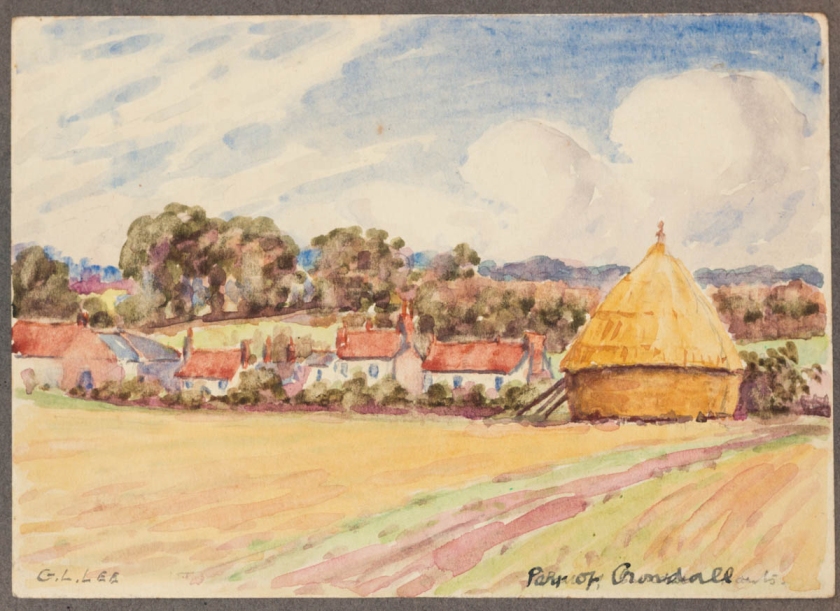