Here goes for a fresh start in a fresh place (I don’t know its name) 10 or 12 miles away from the last.*  We are still well away from the lines though more within their sound, and we are in low wooden huts.

Mad and amusing experience in a little shop, where Madam went to no end of trouble and gesticulation to explain that the police wouldn’t let her sell coffee to soldiers, but that if we went into the back room and got a cup from her mother (and paid for it), it would probably be alright.  It was.

The chaps in this hut made a furious fire in a brazier early this evening and, as there is no chimney, we were almost blinded and asphyxiated.  They never do anything by halves.  The fellows are wonderfully light-hearted and cheerful which, considering how many of them are Gallipoli veterans, is a remarkable thing; they have simply got used to the whole affair.

* The infantry of the NZ Division had returned to the front at Ypres on the night of 14-15 November 1917, while the divisional artillery remained behind the lines.  On 25 November both the 1st and 3rd Brigades and the Divisional Ammunition Column marched to waggon lines in the Boeschepe area, moving from Wallon-Cappel (near Hazebrouck) via St. Sylvestre-Cappel.  They remained in the Boeschepe area until they received orders to return to the line in the Ypres salient on 5 December.  See J. R. Bryne, New Zealand Artillery in the Field, 1914-18, Auckland (1922), pp.199-200. 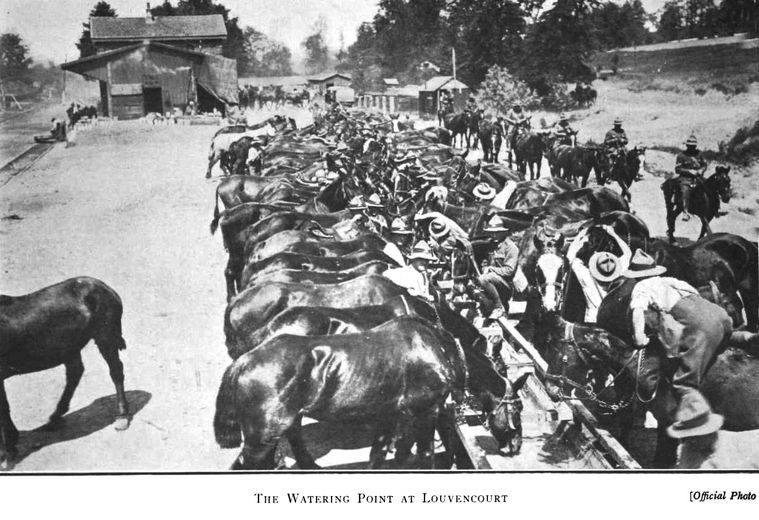 [Image from J. R. Bryne, New Zealand Artillery in the Field, 1914-18, Auckland (1922), p.208.  Louvencourt is in France, south-west of Arras and some distance from Ypres.  It is unknown when this photograph was taken; it nevertheless well-illustrates the work required to care for mounts.]