(Good Friday I think):  It is about noon.  Have been out driving in heavy showers and cold penetrating wind.  There will be more of it this afternoon and we consider ourselves lucky if it isn’t wanted at night.  I want to tell you more about the French towns and villages and this part of the country, but there’s so little time for writing and Heaven knows when we shall be able to post letters – can’t even get tobacco.

There are village pumps, some quite grand affairs, and in the villages are large ponds walled in on 3 sides; apparently common watering places.  Usually a chateau in or near each village, the home of a magnate, and crucifixes which are constructed on tall iron frames and surrounded by quadrangles of fantastically lopped trees, like great gouty hands in their present leafless state.  Many of the refugees met on the trek up here were driving carts filled to the skies with belongings and drawn by diminutive donkeys.  I was amazed to see what they could pull.  It was altogether a singular sight, that of those streams of poor unfortunate people; hatless women with their bundles and their broods; plump, pale, tophatted middle-aged bourgeois; shopkeepers and the like, probably trundling an enormous wheelbarrow piled with the queerest collections; here a hook-nosed dim-sighted taxidermist, with a cargo of musty dusty stuffed foxes which he ought to have been glad to leave behind; there a woman carrying a great fat useless pet dog; a panting girl wheeling her grandfather in a wheelbarrow.  On the other hand, right up here where we are exposed to constant shell fire, a few toothless old gaffers, nosey old crones, are sticking it out.  Today in a village near our battery I saw two women almost coming to blows over some wordy altercation, close to our ammunition dump, which is often shelled and is no healthy locality at any time.

There are some humorous incidents (e.g.) one of our ‘Dinks’ in bibulous and highly hilarious state, bulging with bottles of looted champagne.  The great difficulty everywhere is to get good water – all the wells these folk have been using for generations are labelled by the military with warnings to boil or chlorinate.  (A big gun close by shakes showers of rust off the iron roof of this big old shed all over us every time it fires, and we’ll soon be half buried).  Our canteen man after scouring the country brought back a small supply of the vilest French cigarettes, yet they went off like hot cakes and at an extortionate price. 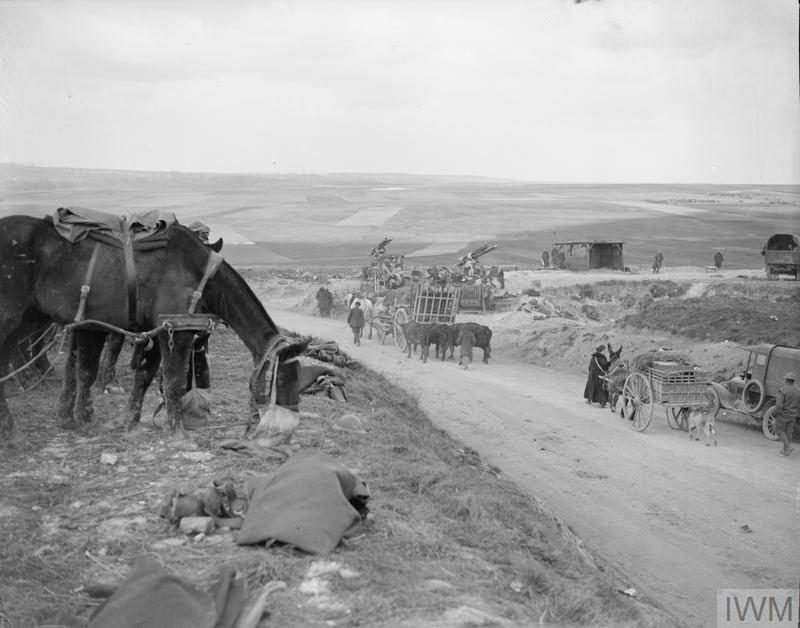