At this moment I am sitting in a field far in advance of our recent lines – the Hun having taken it upon himself to retire about 3 miles all of a sudden.  We are halted here awaiting orders where to proceed.  This is open warfare.  A few minutes ago a small army of tanks came rumbling across the fields in the direction of the scene of hostilities.

Today we got within the enemy’s aerial or balloon observation.  He started to open out on the road we were following.  Then came the shells – thick and fast, failing at first a little ahead, then right amongst us.  Several horses were hit, but no men.  We could feel the heat of the bursts.  We lashed our teams up wildly and bounded on over the shell-holes, those teams who had animals killed casting them out of harness and proceeding with the remainder, some of them right to the guns.  The ammunition was then heaved out in a matter of seconds and we continued our mad career back to the new wagon lines.  This sort of thing is more or less inevitable when the enemy withdraws.  You must push on in the open to keep him within range and with what guns he keeps in action he has a good target.  The war news is now good and there is some hope of being “in at the death”.

[Image: A Wellington Regiment waiting in a trench, during the World War I Battle of Bapaume, before entering the town. View from behind the soldiers looking across a field towards Bapaume. Photograph taken 29 August 1918 by Henry Armytage Sanders. Alexander Turnbull Library, Wellington. Ref. 1/2-013552-G] 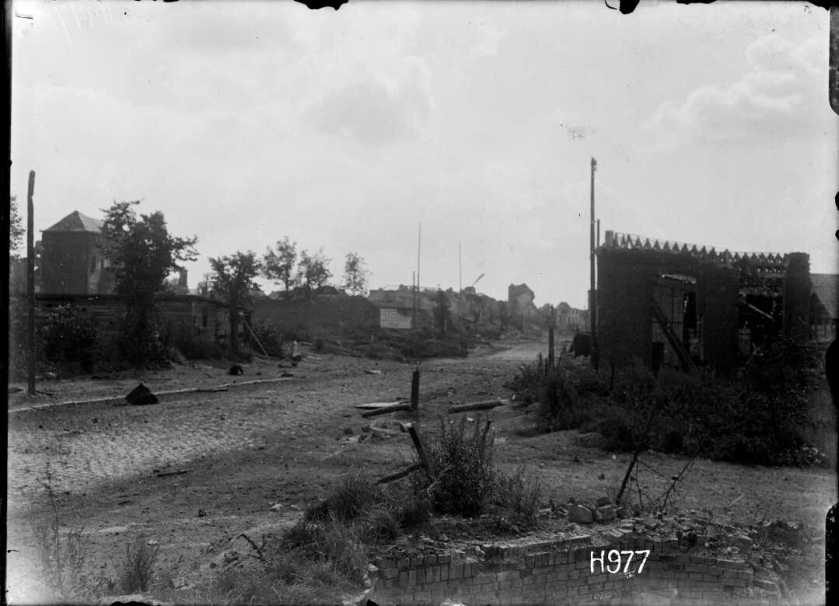 [Image: A general view of the French town of Bapaume taken within an hour of New Zealand troops entering it. Shows the huge amount of destruction caused during the heavy fighting there in World War I. Photograph taken 29 August 1918 by Henry Armytage Sanders. Alexander Turnbull Library, Wellington. Ref. 1/2-013546-G]