My new horses are nice animals, one inclined to kick, the other faultless.  Some of the famished drivers broke into the cook house last night and ate a leg of mutton and there is a deuce of a shindy about it this morning (not intended as a pun).  Near the guns is a great dark wood Havrincourt.

No cigarettes to be had.  Obtained two wicked looking cigars which I now contemplate.  If I don’t smoke them soon they’ll be broken or wet, and if I do – ?  Gradually making the acquaintance of my horses; sturdy, nice and quiet to groom.  Mother asks whether “donks” are “really donkeys or only mules” – what do you say?

We have been watering at a ruined village where the remains of the church bear date 1577.  It is built of brick, so they must have known how to bake good hard ones and make good mortar in those days.  Every village has been razed, the trees all torn and battered (several fell down today when it blew hard) and the countryside is broken with trenches, shell-holes, barbed wire and all sorts of litter and abandoned material.  Cultivation having been long at a standstill, the only thing of the fields is rough grass, thistle and weeds.  In fact there is a ghastly weal right across the face of France, which only peace and time will remove.  The bravest of all men are the German machine-gunners who stay behind and face certain death trying to stop our advance whilst the main forces retire.  You find them in odd corners, dead beside their shattered weapons. 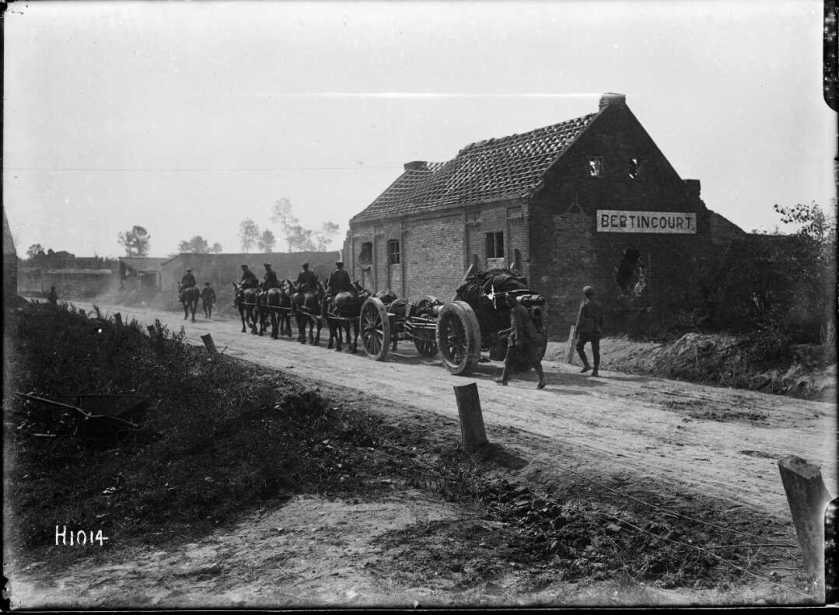 [Image: Shows horses pulling a sixty pounder gun through the captured French village of Bertincourt during World War I. A damaged building on the roadside has the name ‘Bertincourt’ painted on it. Photograph taken 8 September 1918 by Henry Armytage Sanders. Alexander Turnbull Library, Wellington. Ref: 1/2-013580-G]