All yesterday morning getting passes and Dr’s certificates (a ridiculous lie “free from vermin” – the Drs’ are sports enough not to inspect a man who, not having had a bath or change night and day for about 6 weeks, must be in a highly pestilent condition).  We walk about a mile, then wait for a lift.  First lift about 10 to 15 miles – then walk 4 or 5 miles in the slush; another main thoroughfare; another short lift; another tired tramp.  Evening comes on apace – 30 miles yet.  Happy chance!  We stop a lorry – the driver has a brother-in-law in the N.Z. Army, and offers to go out of his way and take us right to the village we want.  Another long, bouncing ride, sitting half asleep amid our belongings, petrol tins and lumber, and we reach this camp about 6.30 p.m.

Passed some interesting feudal relics on the journey – ruined castle and moated grange, drawbridge and hoary grass grown battlements, also a lonely lookout tower, hundreds of years old, standing like a sentinel at a bend in the road.

You see I have discovered the day and date.  I am in the Y.M.C.A. of a Reception Camp, between 25 miles and 30 miles to the rear of where I last put pencil to paper.  I should be too fagged to write, but an unexpected feed has acted as a stimulus and I maintain it by munching ginger-nuts and sipping coca.  Where did I leave you?  Waiting to go on picquet.  Yes, but I never did get that picquet, that is, at the appointed hour.  I was dozing on my overcoat when the urgent voice of the B.S.M. aroused us “get up and be ready to leave in half an hour” – 9pm.

Frantic scramble in the rain with clothes, gear, blankets and “bivvy”, then with the horses and harnesses.

The treck was a nightmare of moisture, mire and movement.  Interminable halts five miles from nowhere, yelling and scrambling across country, half the column occasionally becoming disconnected from the remainder and lost in the darkness; turnings and returning down dubious and darksome ways – thro’ towns, thro’ everything.  At 3.30 am we reached our destination on the outskirts of a town and then I did my picquet.  At about 5 am I crawled into the indescribably filthy loft of a house, littered with piles of tiny potatoes; bundles of dried poppies; women’s clothing.  On that fearsome floor I made my 3 hours’ bed and slept not a wink.

Two short but lively trips to the guns last night.  The Hun was shelling pretty freely so we lost no time about it, finishing just after dark and taking our guerdon in a huge jorum of vegetable stew followed by a rum issue.  After the usual fight with the invisible giants, trying to undress, and make a bed, within 2 feet of a very wet tarpaulin, had a good night’s rest.

Having an hour to spare, took a stroll with a tall taciturn Irishman into the village.  Did a little gesticulating with a solitary, male civilian inhabitant, who had hidden away and was avidly munching some brown flap-jack stuff he had baked.  Pottered about in the looted and dishevelled houses, with pot plants wilting in the front windows, beds overturned and habiliments strewn about the floors.

As I rode to water I was laconically informed that I go on leave tomorrow.  Things moving somewhat in the 2 foot high “bivvy”.

Up 4.30 – sleeping fully dressed saves the trouble of putting one’s clothes on in the morning – and continued pursuit of the Hohenzollern.  There are small towns of industrial type in every direction, a mile apart.

The intervening land shows signs of cultivation and a quantity of carrots etc. have already been bagged.  After a while shelling began and our guns were put into action.  In some places the roads and railways have been blown up and it is necessary to make detours.  We are now, I should say, between 12 and 15 miles in advance of yesterday’s position.  Funny mistake here.  A battery firing from cover of a railway embankment.  One crew forgot to elevate their gun and plonked a shell right into the embankment just in front of them.  Deluge of gravel resulting, but no one hurt.

Erected a cramped and drunken looking bivvy in which we sit on damp earth listening to the shells.  Quievy is deserted, but not very badly damaged.  The inhabitants seem to have been moved out hurriedly, their furniture and household goods being littered about, tables still spread with meals; broken windows; wine stagnating in glasses; dismantled beds, hats, parasols, etc. littered about the floors or in the wet yards and gardens.  Dozens of towns and hundreds of villages must be in the same condition, the Bosche having taken the people with him as he retired. 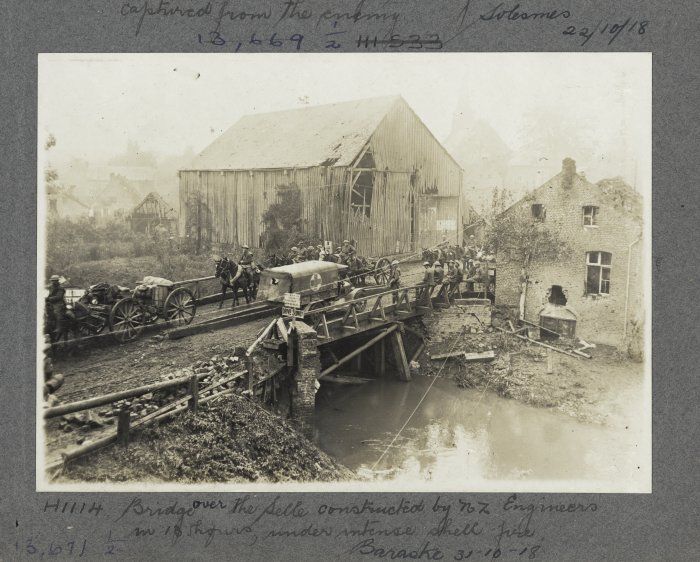 [Image: Shows a bridge over the river Selle, built by New Zealand engineers in 13 hours under shell fire. An ambulance and mounted troops are crossing the bridge. Photograph taken ca 31 October 1918 by Henry Armytage Sanders. Alexander Turnbull Library, Wellington.  Ref: PA1-f-092-1114.  Note: the NZ Division Diary records that the bridge was built 10-11 October by Engineers, and crossed by 1st Brigade (1st Wellington) at 4.30 am on 11 October, meeting enemy resistance.  The photograph was taken some time after this action, with the bridge apparently remaining part of the supply route to the NZ Division.]

I am seated here on a section of light-railway material (rails and sleepers, all iron, made in lengths ready to lay) twisted into all shapes and sizes.  Some land recently cropped, probably by the invader.  In the distance enormous clouds of smoke show where he is burning materials.  As I write, a gigantic, mushroom-shaped sprout of white smoke towers up to a height of possibly 10,000 feet, from some terrific explosion of munitions.  (The difficulties of writing with a hungry horse walking on top of me are not slight.)  We have already come 4 or 5 miles, and our balloons are still being moved up ahead.  You might expect the Hindenburg line to present some such appearance as the Great Wall of China, but as a matter of fact one crosses it without being aware.  For miles we have traversed country showing the recent marks of our own barrage – a gash in the soil about every five yards.  Not a pleasant thing to be caught in.

Saw a French peasant driving his three cows before him; at this early hour making back to his pre-war home.

9 p.m.  ‘Tis not “the head that wears the crown” alone that “uneasy lies”.  At present I am lying in mud, on my haversack, full of shaving gear, cigarette tins and the like, under a tarpaulin hurriedly draped from a gun-wheel, the candle being perched on the hub, and our lullaby being distant guns and the munching of uncomfortably close quadrupeds.

After a hurried tea (everything is hurried now) we again took the road, trecking in the sunset and the light of a young moon for another 5 or 6 kilos, past villages with tall and apparently intact churches and through a manufacturing town, deserted, save for a few prowling soldiers, but undamaged.  In the north a long row of distant fire showed the whereabouts of the enemy.  We are bivouaced on the outskirts of this dark and unknown town, with the cheery advice that we shall probably go into action during the night.

Our wagon lines are here on a level with and even ahead of some of the other batteries’ guns.  We consequently see more of the passing to and fro of the infantry, air fighting and so on.

Had the satisfaction of seeing a Hun “whizzbang” used against its owners.  The “whizzbang” is his ordinary field gun, slightly smaller in calibre than our eighteen pounder but, as the name implies, of higher velocity and greater range.

Rumours of all sorts of good war news, counterbalanced by the fact that the Hun remains at bay right here and is at the moment shelling pretty freely.

Great aerial activity as we filed to water early morning; air vibrant with our planes going or coming in flights of 5, 10, or 20.  Now grazing and watching venturesome Hun aircraft dodging our shells.  Have all been bothered by sneezing fits caused by whiff of gas blowing down the gully.

Another rough spin last night; got to bed about midnight with a tot of rum.  Guns again advanced.  Carting over a terribly rough track in the dark – 3 trips.  Wagon lines now where guns were – good protection from splinters.  Immense activity everywhere – balloons go up in flames (or rather come down) and no place is immune from shells and bombs.

We are in a sharp salient and the sooner we get out of it the better, as the shells appear to be coming from the four points of the compass.  Yesterday the valley in which we lay was systematically swept with big shells.  Our cook got a bit through the cheek and in various places animals were hit.

Amongst the horrible sites are some pathetic ones.  We were followed for some distance by a grievously wounded, wild-eyed, German horse – dying by inches and almost a skeleton.  His eyes were terrible – a dumb reproach to mankind.  You see dead birds, dogs, etc. that have been killed along with human beings.  Then again, there stands near us a fine well-grown tree unscathed, whilst whole forests are rent in fragments.

Heavy fighting is going on all around us and every now and again a barrage, put up either on our sector or an adjoining one, tells that another attack is in progress, and the red cross motor ambulances pass to and fro.  We hear that Bulgaria has capitulated unconditionally and Turkey expected to follow suit – “tres whizbang!” the soldiers say.

We give our animals as much grazing as possible, and rub over at the same time.  The poor brutes are getting thin and poor.  Our own tucker is now plentiful.

Men continue to go on leave and I am beginning to imagine that my turn is not many weeks away – this psychological condition is known in the army as “sweating on leave”.

Sitting on my gear in the morning sun and the roar of a terrific bombardment which started about 5 and it is now 8 a.m.  Yesterday there was much work for men and horses and many hairbreadth escapes, galloping through thick and thin to escape shell fire, and had I have been a spectator instead of a participant in all this stupendous business I might have been able to give you a clear account of it.  I shall not remember much detail afterwards – a blurred impression of noise, rush, horrible sights, more horrible stenches, forces, confusion, mad effort and dreadful death.  We have been on the move each day – last night our teams actually stayed with the guns; that’s how we came to be up here in the middle of the barrage fire.  Went to water at dawn for safety, but got shelled away, besides having to pass under rows and rows of field guns, all blazing away with the strong chance of a premature.  Saw an air fight at close hand, one plane falling in flames.  War on this scale is stupendous – quite unimaginable; you peaceful folk will never conjure up the faintest picture of it.  We sleep when we do sleep, in old dug-outs, under bits of tin, tarpaulins stretched from a bank, or the like.  Usually manage some sort of a wash out of a water bucket; otherwise no toilet.