Well, lords and ladies gay, as yest’er’en I was roaming the nigh meadows contenting myself muchly with the beauties of the late gloaming and endeavouring to depict in rough pencil sketch a cow and other scenery, wondering even whether or no I might string a couple of rhymes together, from such mood rudely was I awakened by the raucous reiteration of my rank and cognomen.  Hastening thither I was quickly and without ceremony informed that the guns were hungry for gas – harness up, load, hook-in and away.  Clatter, clatter, jangle, bump! through the quiet villages and along the country roads – no police about and we are late so let em go – hell-for-leather.  The sky full of bright stars, planets, and nebulae, varied by strange mobile astral bodies supplied by the ingenuity of men; the whole district lit up by the spasmodic flashes of cannon and every now and then, as a memento more, a screech of shrapnel overhead in unpleasant proximity.  The mules were fresh and in the cool night air a bit skittish and there were some surprising exhibitions of shying at motor bikes (their pet abomination) which came badgering out of nowhere and some headlong dives round unexpected obstacles on the roads.  Where we cut across country, it was simply turn your team at the bank and over, trusting to luck that you were in the right place and that the wagon or most of it would follow.  We got there, and not last, though last to start.  By the time we had pulled into our orchard, half-brained by invisible branches banging on our tin hats, reloaded, and got rid of our animals, it was near midnight.  Off with boots and tunic, and under the bedclothes after an enormous jorum of cold Quaker Oats and condensed milk left by our mates.  Find I can cope with the shortage of sleep by correspondingly and in inverse ratio increasing my rations.  After tea we got the now familiar order and “off to war we go again”.  I can tell you we lost no time doing most of the trips at a spanking trot, spontaneously accelerated when passing batteries of sixty-pounders firing salvos. 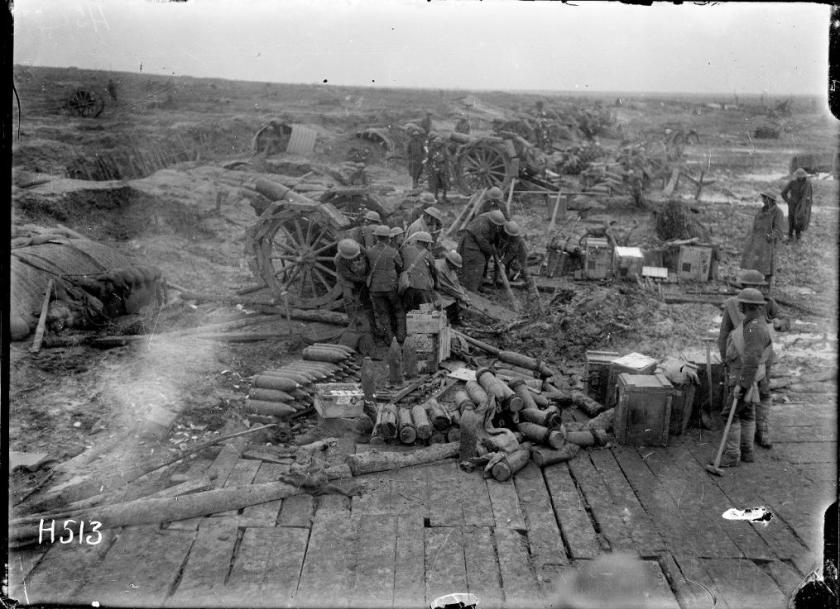