Grazing.  Different trees and shrubs disclose their identity as they come into leaf.  I recognise walnuts, wild woodbine, and other old acquaintances.  Most of the big trees seem to be birches or beeches.

(“Oh to be in England now that April’s there”)*

7.30. p.m.  A mile or two away at the guns.  A small community of 20 or 30 of us in very makeshift shelters along-side a railway embankment.  Our job is to harness up at 4 a.m. each morning in view of emergencies and if and when needed dash to the guns and haul them out.

On the other side of the wood is a village with a name like a sneeze.  “Acheux”.

* The first lines of a poem by Robert Browning 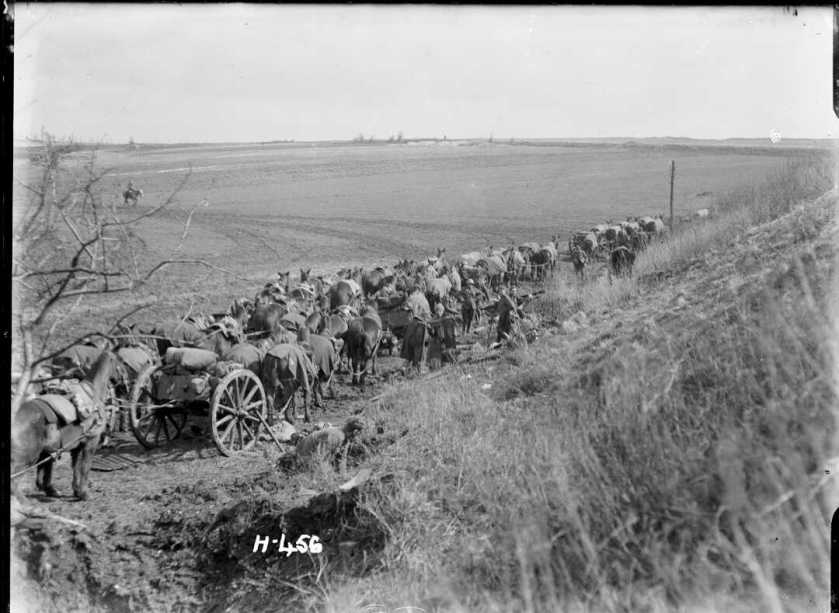 [Image: Several teams of artillery horses sheltered in the lee of a railway embankment during bombardment near Mailly-Maillet on the Somme. Photograph taken 1 April 1918 by Henry Armytage Sanders.  National Library New Zealand, ref: 1/2-013076-G.  Mailly-Maillet is very near Acheux but it is unknown whether this is the same railway embankment referred to by Lincoln in his 15 April entry.]