“Your humble” finds himself in another place and in another capacity.  The complaint from which I have been suffering for the past week still continuing, the medical humourist packed me off to a rest-hospital in the next village.  After protracted delays, I found myself here in a large room which appears to have been a school, its walls being still embellished with 2 maps of the world (“Mappemonde”), a long rigmarole in easy French headed “Declaration des droits de l’homme et du Citoyen”, and a chart showing in lurid lines the effect of alcohol on the internal organs, intituled “L’alcool, viola l’ennemi.”

Here I lie with 20 other convalescent-looking soldiers, awaiting the result of a third dose of castor oil and chlorodyne* during the past few days.

* An pain-relieving medicine with a minty taste; active ingredients of opium, cannabis and chloroform. 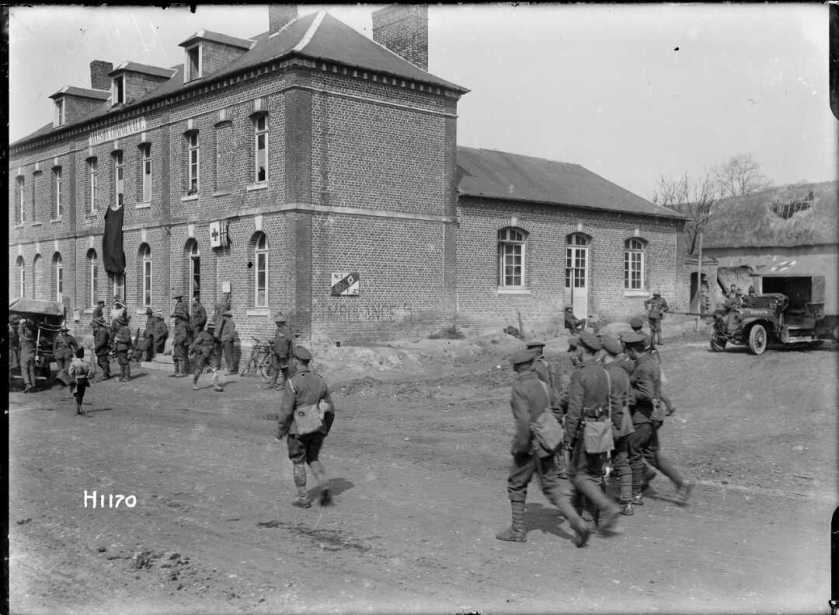 [Image: A general view of a New Zealand Field Ambulance at Louvencourt, France in World War I. Several soldiers are standing around the entrance of the large brick building. A small Red Cross and a Union Jack hang by the door. A group of soldiers is walking past. An ambulance is parked in the background. Photograph taken 22 April 1918 by Henry Armytage Sanders. Alexander Turnbull Library, Wellington. Ref: 1/2-013718-G]