Informed that I was transferred to another ward in the Chateau, to find they had no diet for me.  Befriended the staff and got a feed of spuds, gravy and rice custard.  After that got my gear and was again proceeding to the Chateau when sent back again with orders to transfer there again.  So “I don’t know where I are” (In announcing at a village concert the comic song “He don’t know where he are” the local parson put it – “Mr. … will now sing “He does not know where he is”).

Here I am at the Chateau, sitting under a tree, listening to the birds singing, to the village church bell ringing good Catholics to mass, and awaiting the inspecting officer – I take a fiendish delight in placing military considerations last.

Did a drawing of the Chateau, thinking it would interest you as giving an idea of the type of building.

Have also written to sister Myrtle appraising her of my recent adventures in thunder-land.  The orderly called me to go and get my medicine and I went off with visions of some flowing libation effervescing in a crystal goblet, but was handed instead the most insignificant little white pill. 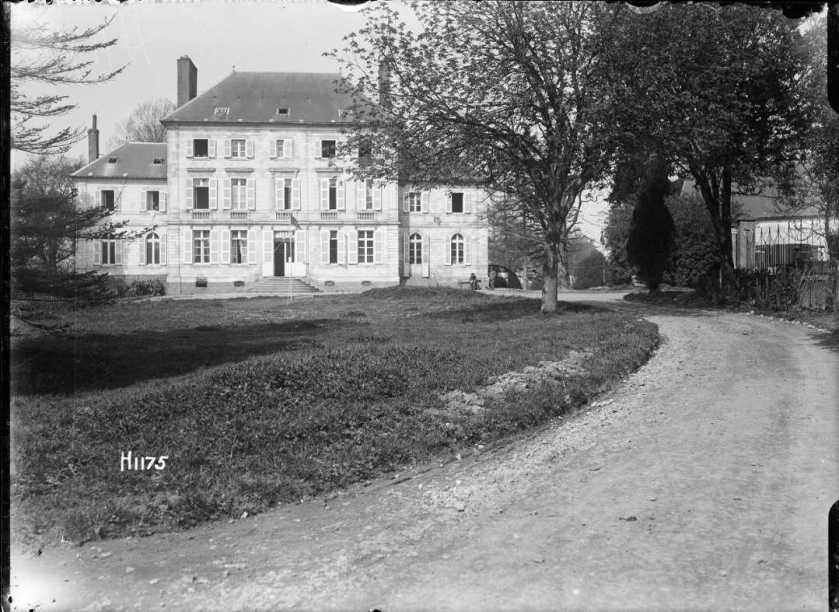 [It is possible Lincoln was referring to this building as the ‘Chateau’.  Image: A general view of the New Zealand Divisional Headquarters in Louvencourt, France for part of 1918, World War I. Shows a large country house at the end of a curving drive. Photograph taken 30 April 1918 by Henry Armytage Sanders. Alexander Turnbull Library, Wellington.  Ref: 1/2-013723-G]