Yesterday morning we set forth for Ordanance with the gun, a journey of some 12 to 15 miles passing along higher country, until we reached one of the great asphalted, tree-lined highways.  This was punctuated by tall, ferro-concrete power poles, with which the French appear to have been reticulating the country, then the road took a tremendous mile-long drive into a deep, wooded valley, landing us in the picturesque little town of Pas.  From its winding streets we emerged on a long slope of 5 to 6 miles, into Doulens.  Its inhabitants had undergone a metamorphosis.  It was now alive with Americans.  They are certainly robust fellows, cut very much to a pattern and as easily recognisable as Chinamen.  We yarned to many of them and found their talk and accent entertaining enough.  The shop people are mostly still at their posts, but the rest of the civilian population seem to have fled.  There are no buildings of any magnificence, but any of these winding streets presents a jumble of grey and ancient architecture, with artistic irregularities of roof and chimney, each building built as a separate creation, of a different height and often at a different level, yet, by long association and the hand of Time, wedded, as it were, and blended into one.

We poked around and bought this, that and the other, drank some mawkish vin blanc and eventually obtained eggs and chips in a suffocating shop, where a lank-haired lantern-jawed little girl bossed us all about and chalked up and calculated the charges with remarkable expertness on the door-post.  The cooking was done in the dining room.

Another diversion was an American band, which played marches with extraordinary vim and in very quick time.  They have their own way of doing everything, even of saluting.

Back to your quarters (eights or sixteenths) as the horizon cut the ripe red sun in half and swallowed it, curled up in our overcoats and damp horse rugs on the floor of a big bare barn.  (These barns, by the way, are fantastically built, maze of curved and beams cunningly fitted and morticed together.)  The gun being duly fixed, we got away in the early afternoon, taking another route back. 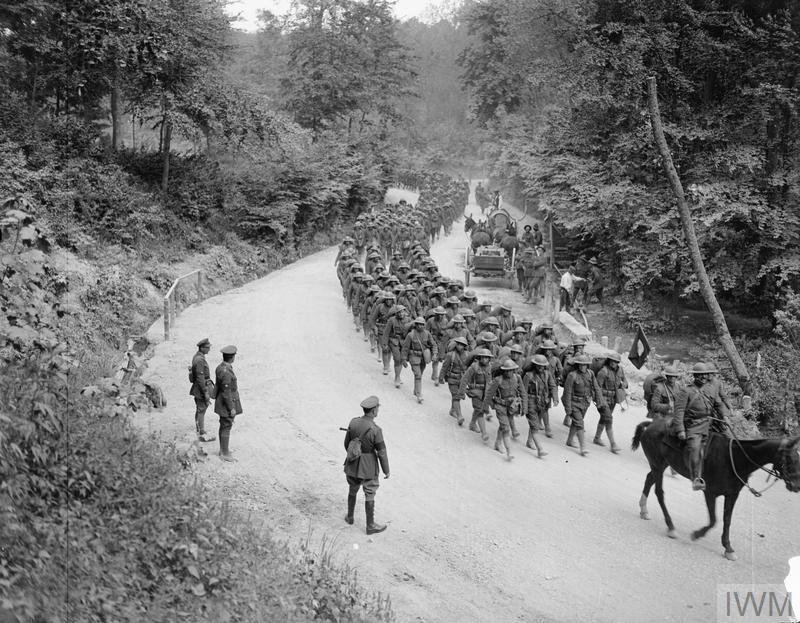